The sun has finally broken through the clouds here in north Wales, and the temptation to get into the Snowdonia hills, got to much to handle. There has been a dusting of snow from 650m up in the northern hills in Snowdonia for a week. So before the winter disappears into the distance I’m out to get some winter hill walking training in.

Breaking back into winter fitness with pack weight takes me some time, so I tend to get a few mid range walks in to create some stamina and get my body, legs and engine used to the different fitness that winter walking has to offer. With the day in question being Saturday, I had been asked by a colleague to go and do the north ridge of Tryfan, which in winter has been on my hit list. Without real fitness, iced up and on a weekend, I decided to get some hill fitness time on Carnedd y filiast instead and leave him to his busy and frozen north ridge. Good job Rob.

The Ogwen valley can get a tad busy at weekends in winter and if you are really serious about bagging peaks, its almost best of you get there at 6am to find parking and begin in the dark. The cars at Cwm idwal, when I got there at 9 am, where already taling back for 400m in either direction from Ogwen cottage! So with that said, I use a bit of discretion and common sense. I head to a quitter part of the Snowdonia range. Now initially I had though about doing some hill repeats, on the steeper sections on Y Garn or Pen Yr Olwen, but with Cwm Idwal being rammed, I chose to opt for the quieter parts of the Carendd y Filiast area and doing some nav with some fitness training with 15kg pack weight.

Why the pack weight you ask? Well winter climbing is what I’m actually getting fitness for, we have to drag up a fair amount of climbing kit with us and it weighs a fair bit so, its always good to get the body accustomed to some extra weight, so when the snow and ice arrives its not too much of a shock to the system.

So Carnedd y Filiast is a nice steep peak, its quite and its remote and I like to practice nav there. The peaks where I can go straight up hard and fast are excellent for the fitness curve, even if I am slow and steady at this point in the year, the diesel engine slowly builds up momentum. I park on the old roman road in a lay-by, don’t obstruct traffic if your going to the same and be considerate to there road users in the valley.  There are two access points to the beginning of the walking route, one stile which is near the house on the roman road and there is a wooden gate further up the old slate quarry man track.

The route winds its way up the grassy sections up into the valley above where at about 650m, where it steepens and then moves into the scree sections up towards the summit. The parking spot for the car starts at 200m and the peak is at 820m and its fairly steep but quite enjoyable indeed. The sun will be on you this time of year from 9am over the top of tryfan and as long as you stick to the outer right section, the sun will grace you with its warming rays up until the scree slopes. I like to break right at the scree slopes and make my summit bit from there. This its around I hiked to 700m, did some hill repeats from 600m-700m on the steep stuff and avoided the scree. The idea of hill repeats comes from my running days where I would practice hills over and over in preparation for the snowdonia marathon. 3-6 sets of South stack hills and steps would be run with a optional 6 mile run bolted on for friendliness.  I wonder how I would cope with that now a decade on.. 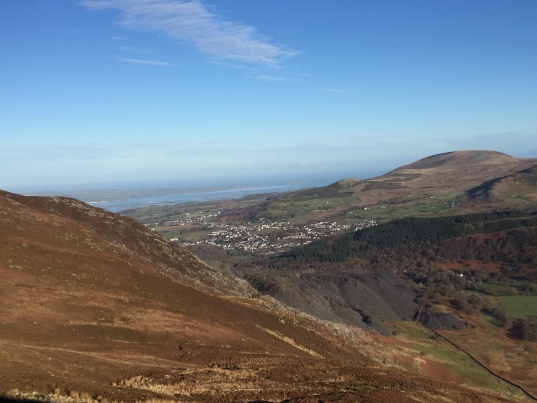 The training worked out well and at 700m I did some relocation nav and had a well deserved Organic warm cocoa, no food for these shorter ones in the sun. Just plenty of stream water from the fast running sections of the streams. Its worth taking a half hour sometimes juts high up to sit and take it all in, I often find that altitude I can get much clearer thinking and things that seemed to bother me, kind of melt away in the midday sun, surrounded by all the beauty that we take so for granted on our door step. Not a soul came by in 3 hours, not even a bird in fact, these was nothing to really mark the barren landscape other than this one lonely sole tree in the distance a 1000m from where I was sitting.

Taking time to readjust our senses to being present and becoming ever conscious of the present moment and giving some gratitude for the blessing and faculties that we have in life is so important. With the world feeling kind of heavy for some many people, I urge you to find solace from a crazy world by finning inner solace in nature, it works for me every time. Nature is the best healer there ever was and is. After lying down on my sack for the best part of thirty minutes, it was time to head down to finish the training off, I like to take a different route down and this time I feathered off tot he left into the valley below, where I found the original path I had been looking for on the ascent. oh well, its nice to go off the beaten track sometime and the beautiful flora, fauna and geology when I go off piste never ceases to amaze me. Some examples of the wild and beautiful plant life of Snowdonia below.

What can me these small walks more significant is the amazing views you get on a blue sky days. Looking over towards Carnedd Daffydd and Llywelyn the white snow line looked especially beautiful with he blue back drop and then over the north west the Menai Strait and Penmon all looked as if they where but a stones throw away, a nice clear line out from land to see cleared by a monstrous glacier almost 10,000 years ago.

So with the sun on my back I decided to descend in a slow an steady way, it was that kind of day, no need to bag the peak, I got the fitness hit, ill go for that on the next run. My last few months has been a little hit and miss on the training front so ill go slow and steady as not to get an injury which is often the case when I’m a thousand mile an hour. The descent is always a great part, try and find a route, see a sheep track follow it for a bit, get a little lost, find another way and repeat. Quite a fun off piste way to descend hill, the occasional step into a mud calf deep bog also tends to amuse me.

The sun was beating so hard down when I got to 300m I could not resist the urge to sit quietly on a rock and take a moment to look at the hills.  Looking up top its east to try and plot new routes. for instance there is a route I saw that traverse the other side of the valley from Pen yr Ol wen to Carnedd Dafydd which looks rather fun, and you could in theory drop down on to the road side rather than have to do that boring walk out to Gerlan!

I got back to the car and then had the great pleasure of waiting a few hours until my partner (a little older and wiser at 70) did his ridge walk. So I headed for a walk around ideal lake and stretched my legs then had some veggie lunch in the sun. Tryfan north ridge will have to be ticked off in the next month I dare say, ill keep you all posted. As I sat until sunset waiting for my friend the most amazing lenticular emerged over y garn and with a night sky behind it looked rather magical. The temperature dropped and the van campers where all in the car parks preparing their sleeps for the night. A great end to a great day.

Thanks for stopping by and reading our blog we appreciate every single one of you. Feel free to leave us a comment, give the blog a like and share the content far and wide. If you have a favourite hike in Snowdonia then drop a mention in the comments below, we love to hear from you all.

Here are some other articles that might be of interest to you regarding Snowodnia.  You could look at our blog on top walks in Snowdonia  That would be a good start, and then maybe have a look at the top attractions in Snowdonia too for some ideas on what to have a look at. Don’t forget we have lots of new ideas on things to do in north Wales on the new website also. Favourite cafes in Snowdonia is another too. Enjoy.

Well if your heading out this weekend, I hope you have a greet weekend here in north Wales, weather look fantastic and there is a dusting of snow on them hills, enjoy and take the usual winter kit packlist, head out early and head down early and check the weather always.

If you want to support our work with whatson, you can do so by buying us a coffee here!

If you haven’t already seen our Facebook, Twitter, and Instagram accounts come and say hi, we are very active on there. Also join our whatson community newsletter here  for up to date insights of what we get up to in north Wales as locals. You’ll be the first to receive blogs, news and insights that we share with the community.

X
We use cookies to ensure that we give you the best experience on our website. If you continue to use this site we will assume that you are happy with it.Ok